By the beginning of the 11th century CE, Viking societies in Scandinavia were undergoing seismic social change.

Christianity had, by the turn of the second millennium CE, taken a formidable stranglehold in Scandinavia. Source: Gorev Evgenii / Shutterstock

Christianity, which had emerged into the peninsula during the early 8th century CE, was now a major force.

Political elites of the three emerging kingdoms of Norway, Denmark, and Sweden were rapidly being baptized. Not everyone, however, was happy with the erosion of the old faith.

The high point of the Viking Age?

Christianity had, by the turn of the second millennium CE, taken such a stranglehold in Scandinavia that the reigning monarchs, as well as most of the political elites, were not only baptized Christians but also heavily involved in the promotion of this new religion.

Sweyn Forkbeard had emerged, by 1000 CE, as perhaps the most successful Viking warrior of the age.

He had not only seized the thrones of Denmark and Norway – despite fierce local opposition – but had sights across the North Sea on England.

By the time of his death, he would succeed where most Vikings had failed and not only conquer England but absorb it into this thalassocracy, the great "North Sea Empire."

Forkbeard's road to Christianity was an eventful one. His father, Harald Bluetooth, was said to have been converted sometime between the mid-960s to early 970s CE.

Like most children, young Sweyn was, to put it mildly, skeptical of his father's new religion. Having serious doubts about converting, he apparently asked the clergy at his father's court to perform a miracle.

Our only written sources about what happened next come from Adam of Bremen, a later medieval chronicler. He regales how one of the priests managed to carry a huge piece of iron, straight from the furnace, without being burnt. This seemed to impress the "doubting Thomas" (sorry, "doubting Sweyn") and secured his baptism into the new Christian faith.

Many scholars and academics have argued that this thalassocracy was the high point of the Viking Age (c. 793 – 1066 CE). It was only by the sheer bloody will and determination of Forkbeard, and his son, Canute the Great (who expanded the empire to its greatest extent from coinage featuring Canute being struck in Sigtuna, Sweden, to the personal submission of the King of Scotland, Malcolm III).

Across the border (which was, in the 11th century CE, about as permeable as a white t-shirt in a monsoon), the year 1000 CE also traditionally marks the beginning of the Swedish monarchy.

Many petty kings and rulers had, since time immemorial, carved out chunks of what is now Sweden. Yet, it was in the late 10th century that Olof Skötkonung ascended to the throne.

He is traditionally listed as Sweden's first Christian king, but he ruled over a kingdom that was patched together despite huge cultural and religious divisions.

Olaf Trygvasson, the grandson of the unifier of Norway, Harald Fairhair, did more than any other Viking-era king to cement Christianity in his kingdom.

He not only oversaw the construction of the country's first church, in Trondheim, and even baptized the explorer Leif Erikson, who would bring a Christian missionary with him on his travels to Greenland.

He also oversaw the wholescale conversion of the inhabitants of the Orkney Islands, then a Norwegian possession.

Trygvasson's vision, some academics have argued, was for a united Christian Scandinavia. Despite being married to Forkbeard's sister, Thyrl, he made overtures to a Swedish princess to try and secure the Swedish kingdom.

If we are to believe the sagas, claims of domestic violence would lead to a war that would be one of the final bloody fightbacks of pagan Scandinavia.

Olaf Trygvasson oversaw the conversion of the inhabitants of the Orkney Islands, a Norwegian possession at the time. Photo: Gonzalo Buzonni / Shutterstock

If we use any of the "King's Sagas" (a list of sagas compiled between the 12 and 14th centuries CE in Iceland dealing with semi-legendary and historical Nordic kings), a slap led to the downfall of Trygvasson.

The overtures made to the Swedish princess resulted in him slapping her face. This was the pretext for war that wily northern Norwegian jarls who were fed up with the pious overbearingness of Trygvasson and the opportunistic Forkbeard were waiting for.

Three different factions joined an alliance that resulted in a huge naval armada defeating Trygvasson in the Baltic Sea upon his return from the peripheries of the Viking world.

The Battle of Svolder (c. 1000 CE) resulted in Norway being carved up, with Skötkonung receiving huge swathes of central and northern Norway whilst Forkbeard gained control of the important Viken district.

Despite Trygvasson's widespread proselytizing, the new rulers of Norway took a laissez-faire approach to religion, granting a certain amount of religious freedom.

This was said to have resulted in a general backlash against the new Christian faith and a return, for many, to the Old Norse religion and would last almost a generation until another Olaf was on the Norwegian throne.

Our focus now must turn to the most distant realm of the "North Sea Empire."

By the time Æthelred was crowned "King of the English," the Anglo-Saxon realm had endured over a century of Norse invasion, warfare, and subjugation.

For almost a century, a huge part of what is now England, and then lesser Anglo-Saxon kingdoms, had been conquered and ruled by the "Danes".

Finally, the Kingdom of Wessex (the only Anglo-Saxon kingdom not subdued by the Norse) had got its act together and expelled most of the Viking presence by the turn of the 11th century CE.

Æthelred took the throne whilst knowing that his rule was precarious. Ruling over a large multiethnic population of Anglo-Saxons, Norse settlers, and Celtic Brits was always going to be a huge challenge.

A threat on his life, whether true or not, by some Viking warrior, led to the St. Brice's Day Massacre. The sagas and later medieval chronicles relate how, on this day, November 13, 1002, CE, apparently thousands of Norse were slaughtered, as a precautionary measure, throughout England by the forces of Æthelred.

Recent archaeological findings point to a mass grave of 30. Whatever the number, it was a pretext that Forkbeard needed. He led a huge flotilla to invade England and go about a bloody rampage desecrating Christian churches and putting many of his Christian brothers and sisters to the sword.

It was, perhaps, making atonement for this bloody retaliation against the Christians in England that later in his rule Forkbeard favored mostly British priests and clergy. Some academics have pointed out that this was due to more worldly reasons, as he was trying to counterbalance the influence of the powerful clergy in the Holy Roman Empire.

Olaf Haraldsson marched an army through the Swedish alps to try and claim the Norwegian capital at Nidaros (Trondheim). Pictured is the Nidaros Cathedral. Photo: Vachonya / Shutterstock

By the time of Forkbeard's untimely death in 1015 CE, there was no doubt that Christianity was here to stay throughout most Viking societies.

Despite Forkbeard's lapses in England, he set about promoting the new Christian faith in his realms and even donated large amounts of money for churches to be constructed in Sweden.

Throughout Sweden, Olaf did not stamp paganism out entirely (the Temple at Uppsala would outlive the Viking Age until being torn down in 1086 CE).

Without having the political will, or military, to suppress paganism, he made an alliance that resulted in the establishment of Sweden's first episcopal see at Skara. Pagans would not be forced to convert, but the die was cast. It would take another two centuries for all of Sweden to convert wholeheartedly to Christianity.

Across the border in Norway, Olaf Haraldsson, a Norwegian noble who had spent much of his younger years in England with his Viking brethren, took swift advantage of the power vacuum led by Forkbeard's untimely death.

Having been baptized by no less than the Bishop of Normandy whilst staying in the new Viking enclave, he saw it as his mission to reunite Norway as Harald Fairhair had done.

He returned to Norway to be crowned King, with the support of northern Norwegian jarls but was driven to exile in 1029 CE.

His return, marching an army through the Swedish alps to try and claim the Norwegian capital at Nidaros (Trondheim), was ultimately unsuccessful.

He died at the Battle of Stiklestad but would live on as being Christened, a century later, Norway's first saint and perpetual King. Contemporary Norwegian accounts state how he fell in battle for Christianity.

The new medieval Kingdoms of Denmark, Norway, and Sweden were, by the mid-1050s CE, on a path to being integrated into broader Christian Europe.

It had taken centuries, but the battle between the old world and the new religion had reached the point of no return. The Hvítakristr (what the Norse called Jesus Christ) had won.

For more on the Christianization of Viking societies, the National Museum of Denmark has a plethora of information on this process available here. 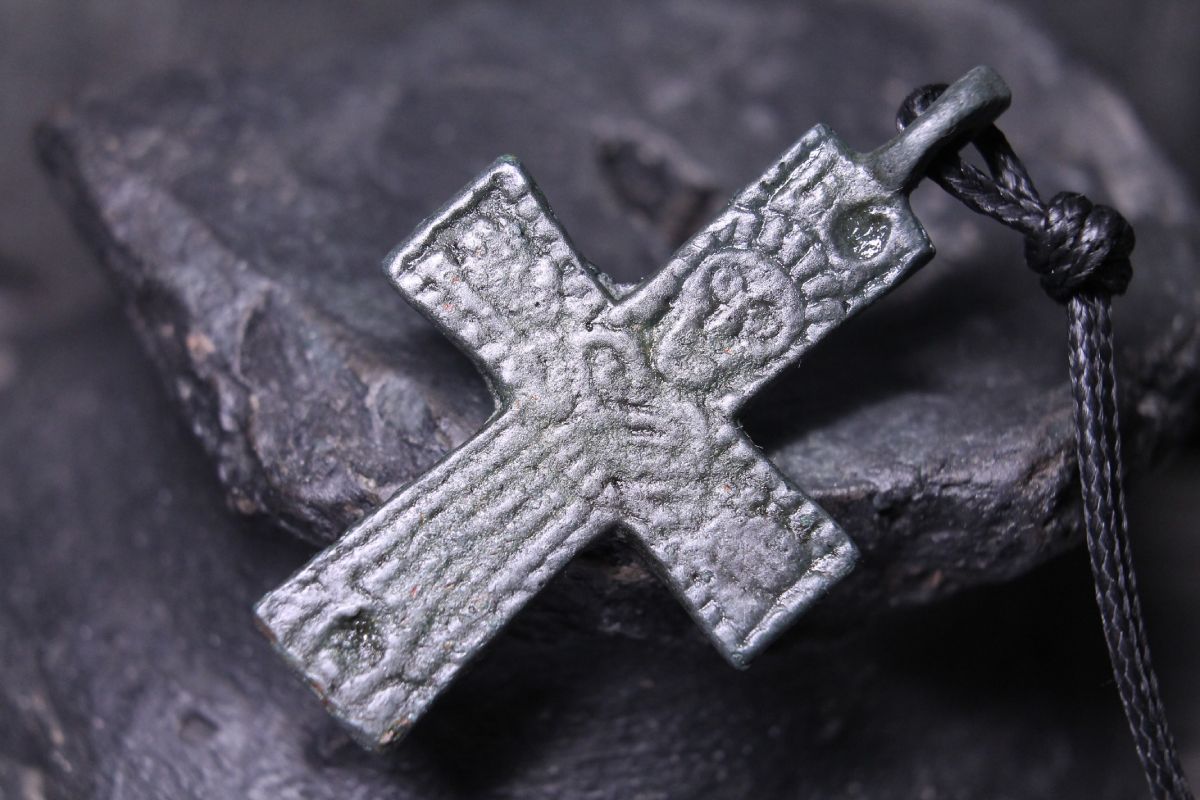