For Viking warriors, death was not the end, only the beginning. Those who were slain in battle, and deemed worthy and brave enough, would be led by Valkyries to join Odin in Valhalla.

The descriptions of Valhalla have been passed down to us through Norse sagas. Source: Mingwei Lim / Unsplash

Long after the Viking Age, this majestic hall, a cornerstone of Norse mythology, has become embedded in the popular imagination. What is Valhalla, and why has it remained a popular image for more than a millennium?

The early medieval period in Europe, of which peoples from Viking societies dominated, was, to put it bluntly, bloody. Power often lay at the end of a sword or a battle-ax, and Viking warriors raided, pillaged, and plundered everywhere from Scandinavia to Sicily, from Greenland to Baghdad. People from Viking societies placed a high degree of importance and social status on Viking warriors. Their culture was highly martial and, in part, fed by the tales and legends of Norse mythology and saga. Martial skill and valor were intrinsic parts of these societies, whilst violence and death were prevalent throughout them.

As these seafaring warriors raided, traded, and settled throughout much of Europe, West Asia, and the Mediterranean world, they came across more advanced societies, cultures, and militaries. Nonetheless, their fierce martial skill, battlefield tactics, superior naval skills, and weapon technology saw them conquer, subjugate and defeat many early medieval armies. Part of this fierce martial skill, however hard to quantify, relates to their belief in Valhalla.

Where did Vikings' souls end up anyway?

Valhalla was an important part of Norse mythology. The modern English Valhalla is based on the Old Norse term, Valhǫll. This term itself is made up of two components, valr ('the slain) and hǫll (hall). This hall is said to be located in Asgard, which is ruled over by the Norse god Odin. Following death, the soul of a Viking warrior faced two options.

The first was to be selected by the Valkyries (a woman warrior who decided their fate in battle) and carried off to Valhalla. Here, Odin received the slain warriors' souls, and they would feast and dine with him. These warriors have been selected for their bravery or martial skill and will aid Odin and the Valkyries when the cataclysmic events of Ragnarök eventuate.

The second option, for the other Viking warrior souls, was to be ferried off to the field of Fólkvangr, which is ruled over by the goddess Freyja. To be selected to dine and wine with Odin until the end of days was considered a high honor for any Viking warrior's soul, and thus, they had to show bravery and skill on the battlefield to earn this prestigious prize post-life.

Early Christian bias of the sources?

The descriptions of Valhalla have been passed down to us through Norse sagas, legends, and lore. However, it should be noted that little of this was written by pagan Vikings in the early medieval period. Most of what we know about Valhalla came from Norse sagas that had been translated and written down by Christian scholars throughout Northern Europe, hundreds of years after the end of the so-called "Viking Age."

The increasing primacy of Christianity throughout Europe during the early and high medieval period meant that these scholars had a heavy bias against these pagan religions and belief systems.

There are some similar parallels between the Norse concept of Valhalla and the Christian concept of heaven. Both belief systems believed in an afterlife and that your actions in the present life determined what happens in the next. This surely played into the hands of early Christian missionaries to Scandinavia as the introduction of an eternal afterlife was already a familiar concept. Like the Valkyries selecting only the "chosen" warriors to enter Valhalla, God would only allow good Christian souls to "enter" the "Kingdom of Heaven." 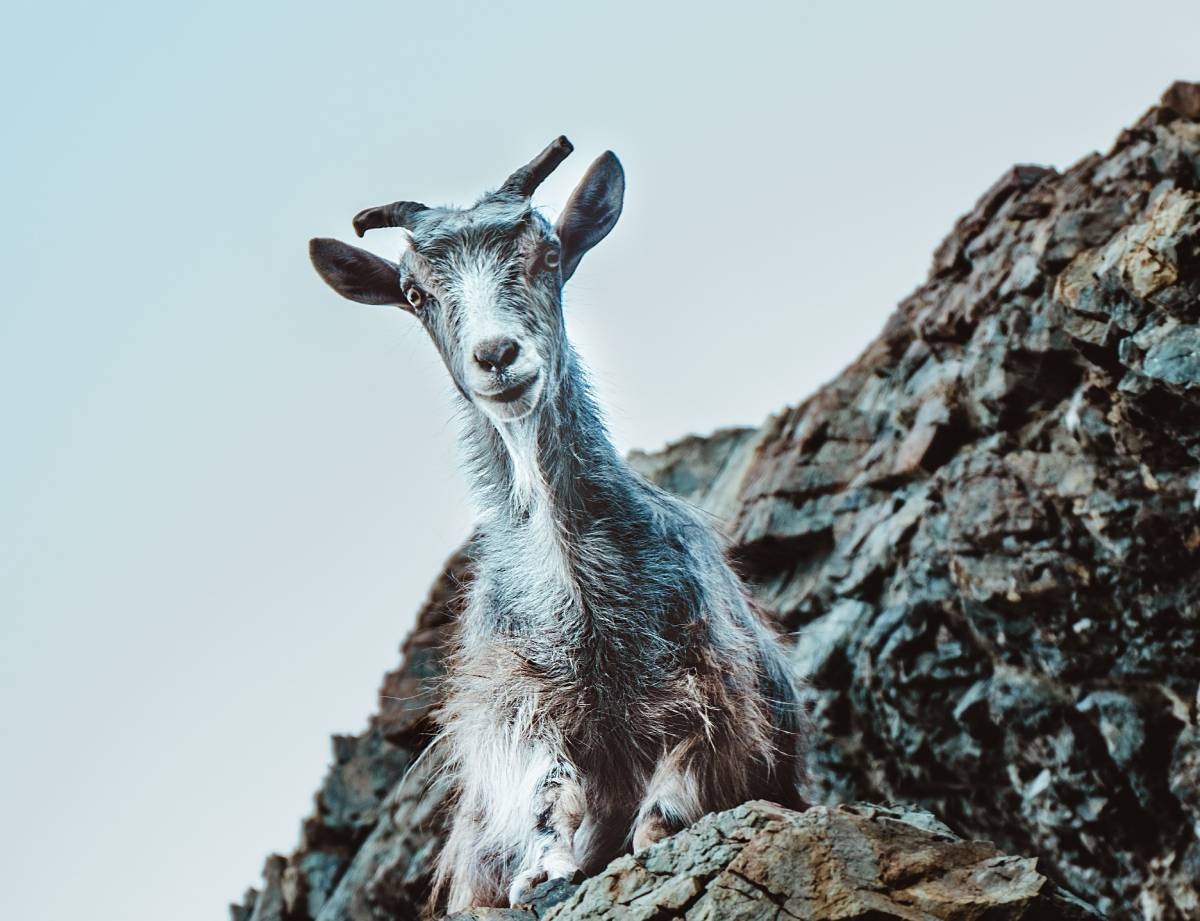 According to myths, a goat in Valhalla named Heidrun would supply the einherjar with mead it produced after consuming the buds from the tree called Læred. Photo: Maria Teneva / Unsplash

A place of mead serving goats, resurrecting boars, and doors so wide that 960 unicorns could fit through

Regardless of their bias, these medieval Christian scholars have left with us a rich and detailed picture of (what they believed that peoples in Viking societies believed about) Valhalla.

The large festival hall is situated in the abode and fortress of Norse gods, Åsgard. The hall was said to be so big – it had to, after all, house the living souls of all fallen warriors for eternity – that it had 540 doors. Each of these doors was said to be so wide that 960 unicorns could walk side by side through it.

The roof is covered by the branches of a tree, Læred, which is nibbled by the two mythical animals: a goat, Heidrun, and a deer, Eiktyrne. Aside from being in charge of Valhalla's weed maintenance by chomping on those branches, Heidrun also provides all warriors with that nectar of the (Viking) gods, mead. Taking pride of place in the hall, however, is the daily sacrifice of the boar, Særimme. The boar miraculously resurrects every night to be consumed again in the morning.

What do the sagas tell us?

Littered throughout many of the Norse sagas are vivid descriptions of Valhalla. This location played a somewhat similar literary role to a combination of the Underworld and Mount Olympus in Greek mythology – it was a desired destination and abode of the gods, yet being there meant you had fallen in battle.

One of the best snippets of Valhalla, in the sagas, comes from a part of the Poetic Edda. The hero of this saga, Helgi Hudingsbane, falls in battle and is selected to go to Valhalla. Following his arrival, he exacts the best sort of revenge on a former enemy by forcing him to do menial and boring oddjobs ranging from tending to the horses and feeding pigs to washing basins for the (probably) stinky feet of fallen warriors. Washing an enemy's – or, let's be honest, even a friend's – feet can be repulsive enough in this life, let alone after one is dead.

A section of the 10th-century skaldic poem, Eiríksmál, also paints a vivid description of Valhalla. Written in tribute to Norwegian Queen Gunnhild's slain consort, Erik Bloodaxe (a wonderful Viking name), it deals with the visit of Ægir (the personification of the sea in Norse mythology) to Asgård. The poem begins with a sort of running commentatory on the daily beginnings of the feasting by Odin:

"What kind of a dream is it," said Óðinn,
in which just before daybreak,
I thought I cleared Valhǫll,
for coming of slain men?
I waked the Einherjar,
bade valkyries rise up,
to strew the bench,
and scour the beakers,

wine to carry,
as for a king's coming,
here to me I expect
heroes' coming from the world,
certain great ones,
so glad is my heart

In popular culture and a tribute to great Germans

For those over a certain age (I'm looking at you, baby boomers), the term Valhalla brings back memories from their wilder, long-haired younger days. It was, of course, most famously mentioned in Led Zeppelin's "Immigrant Song" from their 1970 album, Led Zeppelin III.

The whole song features lyrical references to Norse mythology and was based on a gig they had done the previous year in Reykjavik, the literal land of "ice and snow." For younger generations, Valhalla was recently popularized thanks to the latest release of the Assassin's Creed video game, steeped in Norse mythology and Viking history.

For those wanting to actually visit Valhalla, they can visit the small German market town of Donaustauf in Bavaria. Here, rising above the Danube River, is Walhalla, a huge neo-classical memorial shrine. Conceived in 1807 by Crown Prince Ludwig I of Bavaria, it is a hall of fame that honors notable "politicians, sovereigns, scientists and artists of the German tongue."

What is most interesting is that when construction was complete in the early 1820s, it was more than five decades before the formation of a modern German national state. There are more than 65 plagues and 130 busts covering over 2,000 years of "German" history, beginning with the Battle of the Teutoburg Forest in 9 CE. The latest bust to be added. earlier this year, to the shrine, was that of Max Planck, the 1918 Nobel Physics Prize laureate.

For an analysis of the debate surrounding author Neil Gaiman's recent book, Norse Mythology (which retells some of the best-loved Norse myths and legends), visit The Atlantic website here.

For more information and context on the construction of Walhalla, read a travel article on it from The New York Times here.

Norse mythology Valkyries Odin Valhalla
Do you have a tip that you would like to share with The Viking Herald?
Feel free to reach out to discuss potential stories that may be in the public interest. You can reach us via email at hello@thevikingherald.com with the understanding that the information you provide might be used in our reporting and stories.