Scandinavia is a region in northern Europe known for everything from pristine nature and cool architecture, across a high living standard, and high costs – to the Vikings and their intriguing Norse mythology. In this article, we're covering the Scandinavian countries and their fascinating features. 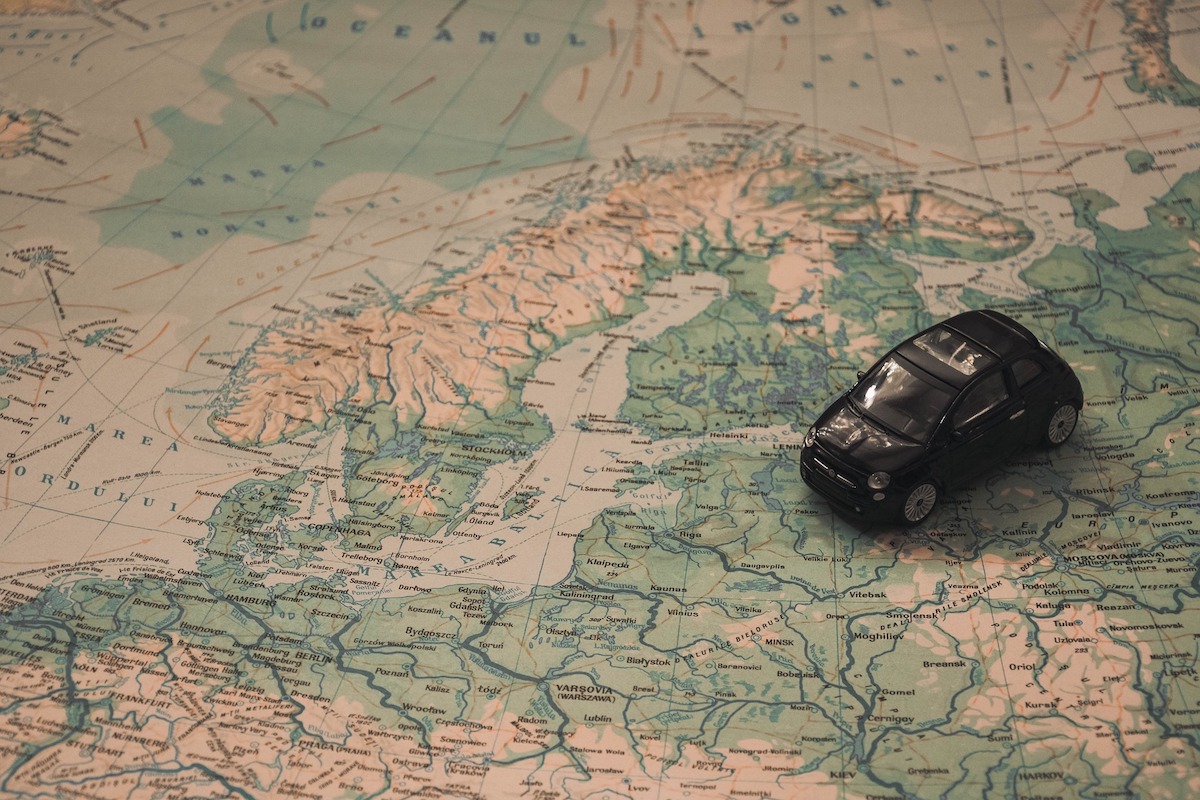 Let's delve into the countries that make up Scandinavia. Source: Pexels / Pixabay

The word "Scandinavia" is thought to have been used for millennia. One of the earliest documents containing the term is The Natural History by Pliny the Elder (23/24-79 AD). He wrote:

"This gulf ... is filled with islands; the most famous among which is Scandinavia, of a magnitude as yet unascertained..."

Today, Scandinavia usually refers to the countries of Denmark (but without its outlying territories; more on that later), Norway, and Sweden. Together, these three nations cover an area of over 850,000 square kilometers that stretches well north of the Arctic Circle all the way to continental Europe. 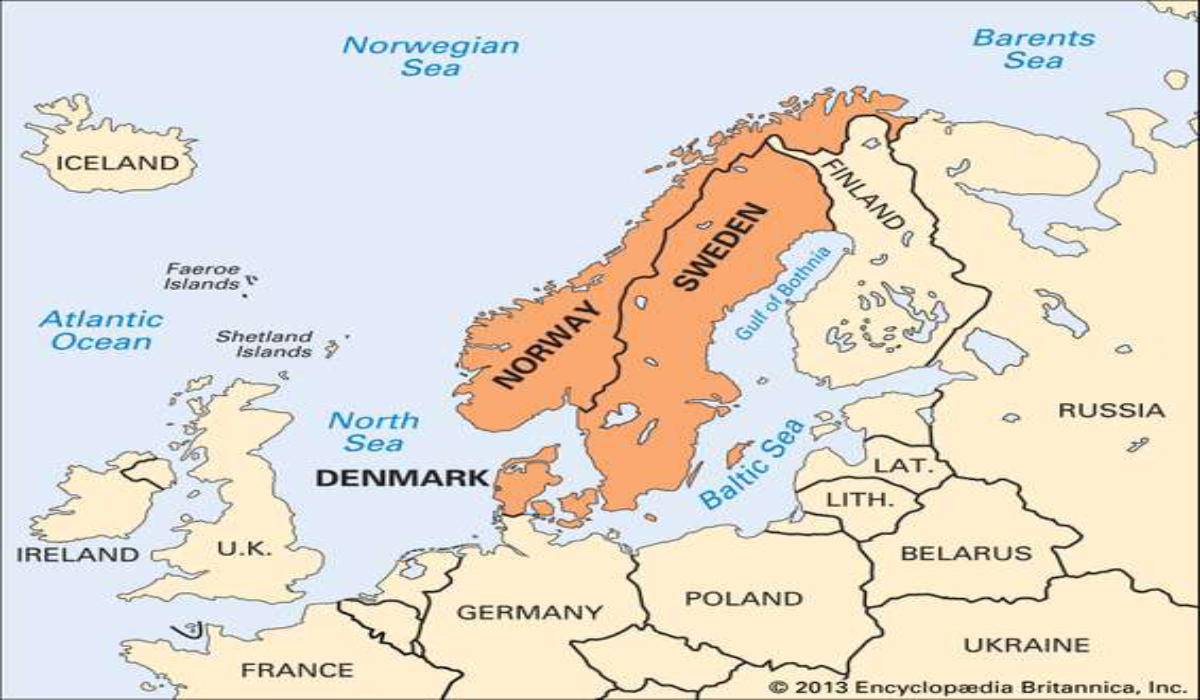 What unite this trio – somewhat – are geography, parts of a shared history (including a strong Viking presence), languages that belong to the same branch, and a number of cultural similarities.

However, "Scandinavia" is, like any other word, a symbol whose meaning is subject to change – and it's not set in stone. So, while Scandinavia most often refers to Denmark, Norway, and Sweden, it's sometimes also used interchangeably with the term "Nordic countries," which expands to include Finland, Iceland, and the Danish territories of Greenland and the Faroe Islands.

The Scandinavian Peninsula, also known as the Fennoscandian Peninsula, Fenno-Scandinavia, or Fennoscandia, is actually comprised of the Finnish, Norwegian, and Swedish mainlands. So, Finland, Norway, and Sweden are geographically connected within the peninsula, while Denmark sits to the south, right across the Skagerrak Strait.

Among commonalities shared by Finland, Norway, and Sweden is the fact that these lands have, for thousands of years, been inhabited by the indigenous Saami peoples (who haven't been as linked to Denmark). Each of the three nations has another, unfortunate, similarity here: a very dark past regarding their treatment of the Saami.

Finland, Norway, and Sweden have significant differences, too. Moreso than the Scandinavian trio, the Fennoscandian trio diverges linguistically and historically. 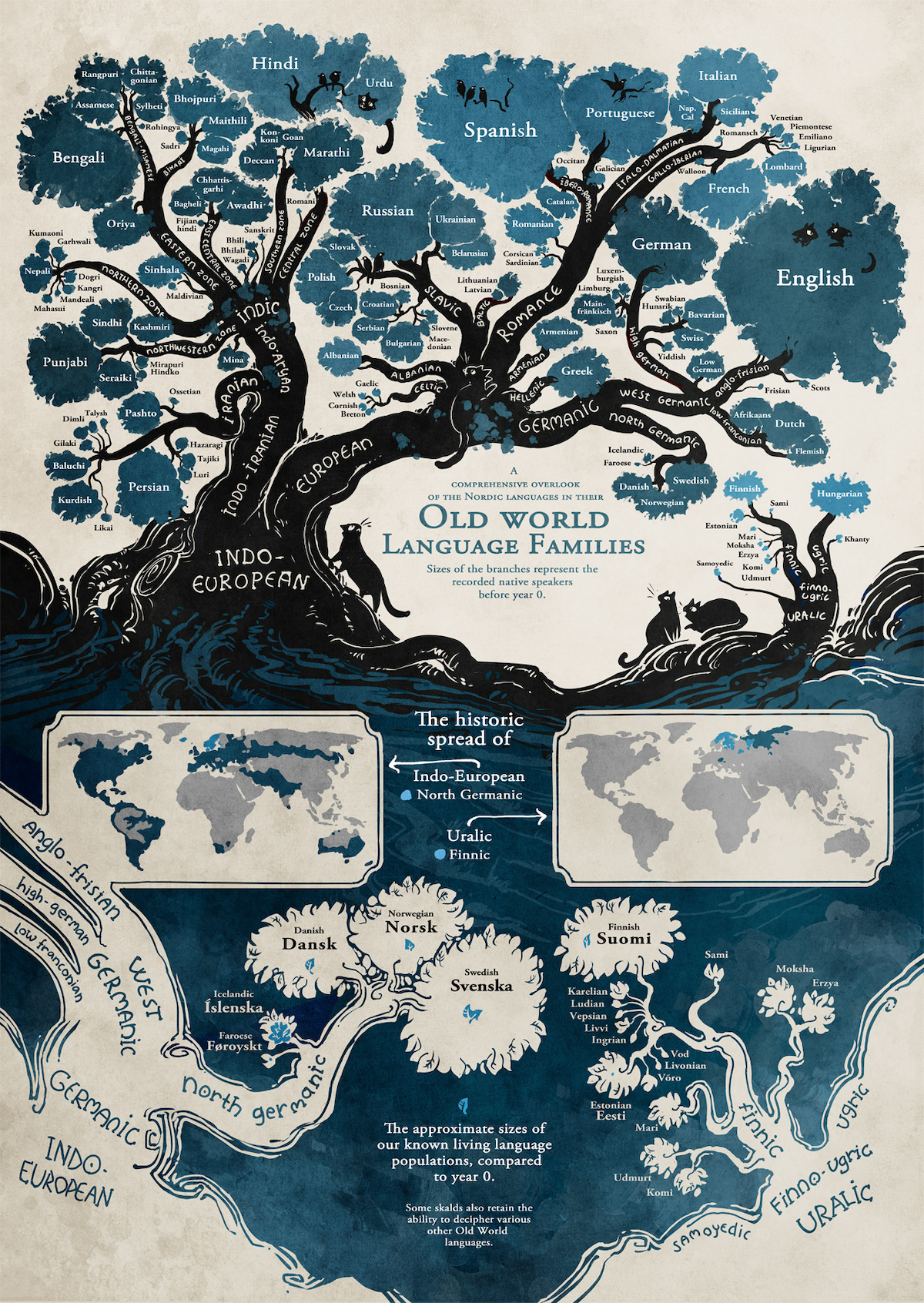 Most Norwegians and Swedes speak languages that belong to the same, Indo-European language tree – and the same North Germanic branch, at that. Finnish, on the other hand, is part of the Finno-Ugric language tree, along with a handful of other languages spoken on the Baltic Sea, including Estonian. The second official language in Finland is Swedish (an Indo-European language); however, it's the mother tongue of less than 10% of the population. Finland is also separated from Norway and Sweden by the Gulf of Bothnia, part of the Baltic Sea.

History, too, plays a part in the grouping together of Denmark, Norway, and Sweden, which were historically all kingdoms. Denmark and Sweden fought multiple wars against each other – often over Norway – in the past. The three also intermittently functioned as one, as wars were won and lost. For example, over the centuries, they've all been united (in the medieval Kalmar Union), there's been a Norwegian and Swedish union, and there's been a Norwegian and Danish union - which lasted 400 years.

Scandinavia vs. the Nordics

The Nordics are a wider group than the Scandinavian countries, including nations and regions less tightly knit than Scandinavia, but with clear similarities nonetheless.

A number of regions in northwestern Europe and the northern Atlantic Ocean make up the Nordic region. Iceland and Finland, along with the Danish territories of Greenland and the Faroe Islands, also join Denmark, Norway, and Sweden in the Nordics.

Along with their geographical proximity and sweeping cold temperatures, another commonality of the Nordics is that most members regularly top global well-being rankings. 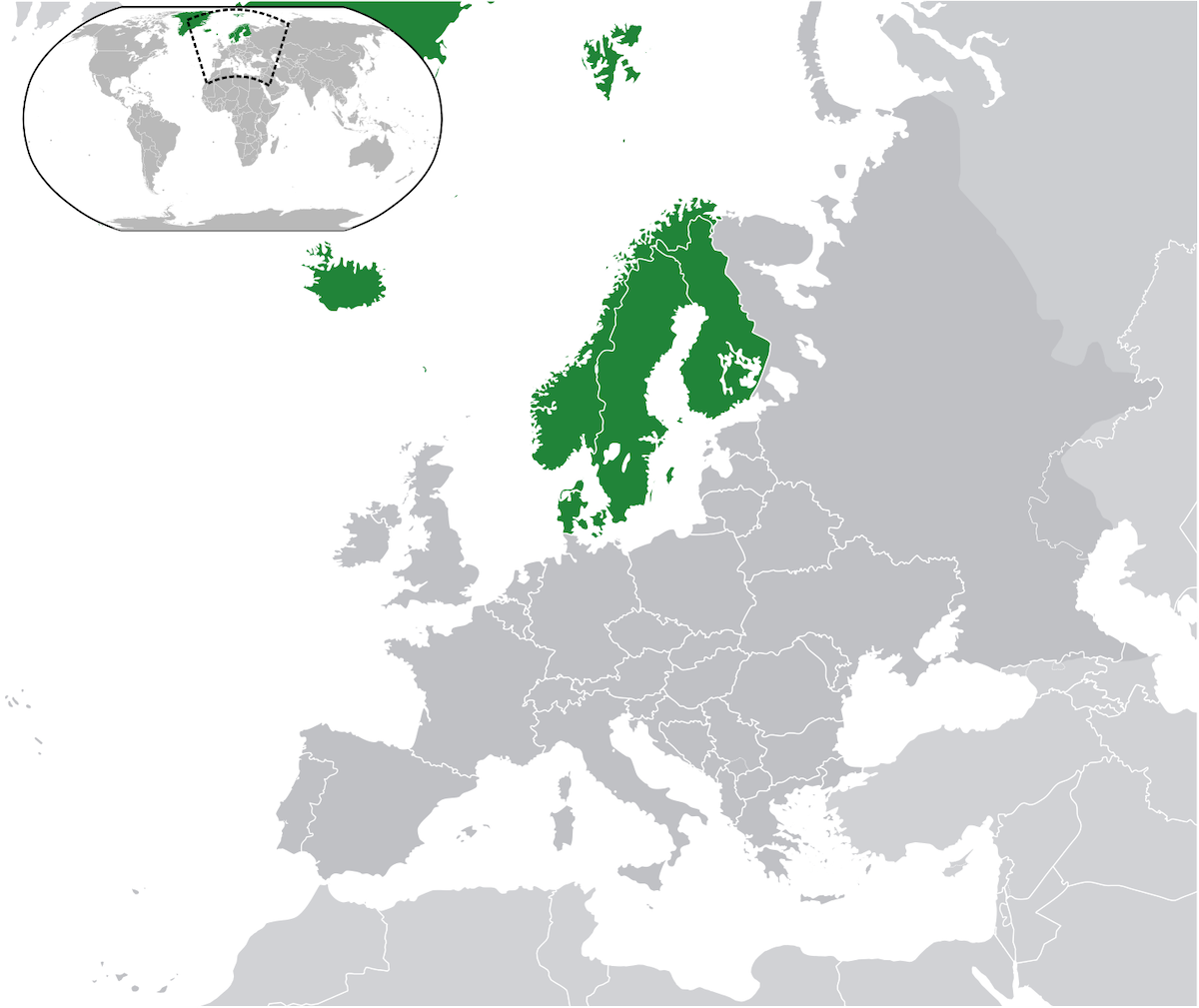 As for wider political affiliations, Denmark, Finland, and Sweden are the only Nordic countries that are European Union members. Denmark's autonomic territories of Greenland and the Faroe Islands decided to remain more separate from the EU. While Iceland and Norway are not part of the EU, they are part of the European Economic Area, which allows them to partake in the EU's single market.

To sum it all up: Denmark, Norway, and Sweden are old kingdoms, which were united at times. They have mutually understandable majority languages, and all three are known for being historic homes of Vikings. Overall, this trio is most often considered Scandinavia.

Now, let's take a look at each individual country.

Denmark is the smallest country in Scandinavia by land, but comes in second by population and first by population density. It's home to about 5.8 million people and has a surface area of almost 43,000 km². Its official language is Danish.

Denmark experiences a temperate climate for its latitude, thanks to the Gulf Stream. During the winter, temperatures linger around 0°C, while July is its warmest month, with an average temperature of about 16°C.

Denmark is a constitutional monarchy. The country is led by the prime minister, who is currently Mette Frederiksen, while its monarch is Queen Margrethe II. Denmark's currency is the Danish krone.

Fun fact: One of the most famous Danes is author Hans Christian Andersen, who created The Little Mermaid, Thumbelina, The Princess and the Pea, and many more fairytales.

Compared to Denmark, Norway comes in at a whopping 385,000km²+ surface area (not including Svalbard and Jan Mayen), with a population of 5.3 million people living across it. Norway's capital city is Oslo, and its currency is the Norwegian krone.

Norway still has a relatively temperate climate (thank you, Gulf Stream). However, it's much colder overall, as much of the country sits above the Arctic Circle. Average temperatures vary significantly on which part of Norway you're in, but sub-zero or barely-above-zero is the winter norm across the board. Norway's Svalbard, an archipelago in the Arctic Ocean, is especially not for the faint of heart. Particularly in January, when temperatures average -20°C to -13°C.

But braving the cold just might be worth it because seeing the northern lights is possible in Norway and Sweden (it's more uncommon in Denmark) during the teeth-chattering months.

Norway is also a constitutional monarchy. At the time of writing, the prime minister is Erna Solberg, and the monarchs are King Harald V and Queen Sonja.

Fun fact: Constitution Day is the most important national celebration for many Norwegians. Annually on May 17, Norwegians mark the creation of their constitution by donning bunaden, traditional Norwegian folk wear, and partaking in or watching local parades.

Sweden has the largest population (about 10.3 million) and largest mainland surface area (over 450,000 km²) of Scandinavia. Stockholm is Sweden's capital, and Swedish is its official language. The country's currency – you almost guessed it – is the Swedish krona.

While Sweden generally enjoys a cold-but-temperate climate (again, for its latitude), the change between warmer summers and frigid winters tends to be extreme, especially the further north you get. If you plan to visit Sweden (or almost any Nordic country) choose your timing wisely. We've already mentioned that in the winter, long, dark, and cold days await. But the warmer months in the Nordics are also unique. You'll experience long days in the summer when the sun barely goes down – or simply stays up for 24 hours a day. The duration of the summer day depends on how far north you are. On the plus side, the midnight sun means extra daylight for more sightseeing activities.

Like its Scandinavian neighbors, the Swedish government is a constitutional monarchy. The prime minister is currently Stefan Löfven, and the monarchs are King Carl XVI Gustaf and Queen Silvia.

Beyond Scandinavia: The rest of the Nordics

Finland's official languages are Finnish and Swedish. Its capital city is Helsinki, and its currency is the euro.

Fun fact: Finland was officially named the happiest country in the world by the UN in 2021 – for the fourth year in a row.

Iceland's official language is Icelandic. Its capital city is Reykjavík, and its currency is the Icelandic krona.

Fun fact: Iceland is – among many fascinating things – known for its adorable fluffy horses.

Sitting between the Atlantic and Arctic oceans, Greenland is the world's largest island that's not classified as a continent.

Greenland's capital city is Nuuk, its official languages are Greenlandic and Danish, and its currency is the Danish krone.

Fun fact: 80% of Greenland's surface area is covered in ice. Greenland's ice sheet – which stretches over 2,400 kilometers from north to south – is one of the world's largest, second only to Antarctica's.

The Faroe Islands are an archipelago of 18 islands with a rocky, volcanic topography. They sit between Norway and Iceland in the North Atlantic Ocean.

The Faroe Islands' capital city is Tórshavn, their official languages are Faroese and Danish, and their currency is the Danish krone.

Fun fact: Many Faroe Islanders opt out of lawnmowers – instead, sheep keep their property trim.

Denmark Norway Sweden
Do you have a tip that you would like to share with The Viking Herald?
Feel free to reach out to discuss potential stories that may be in the public interest. You can reach us via email at hello@thevikingherald.com with the understanding that the information you provide might be used in our reporting and stories.